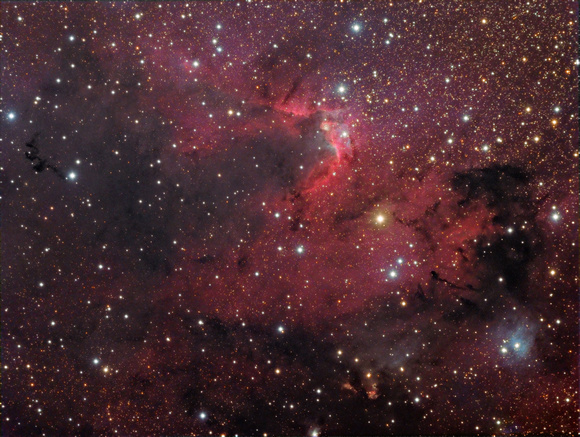 Initially, I assumed that the Ha data would be needed to show much of the structure of this area, but it really didn't contribute much to the image. I tried it in the L channel, but the only place it noticeably added to the image was in the red channel where I used a combination of L and Ha 40/60) to enhance the data. Even this made very little impact.

The structure collectively know as the "Cave Nebula" (aka Caldwell 9) is a vast conglomerate of glowing gas, dust, and reflected starlight in the southeast corner of Cepheus about 2400 light years from earth. The "cave" itself is not dark in this image, but a medium gray mass of dust moving over the emission nebula from the left and abutting the brightest part of the emission nebulosity.

Blue reflection nebula vdB 155 is present at the lower right. LDN1215 an LDN1214 are protruding in from the right over top of vdB 155. Other interesting structures, such as the curly spring or "pig tail" dark nebula on the left seems to be nameless, or at least I could not find a name for it.