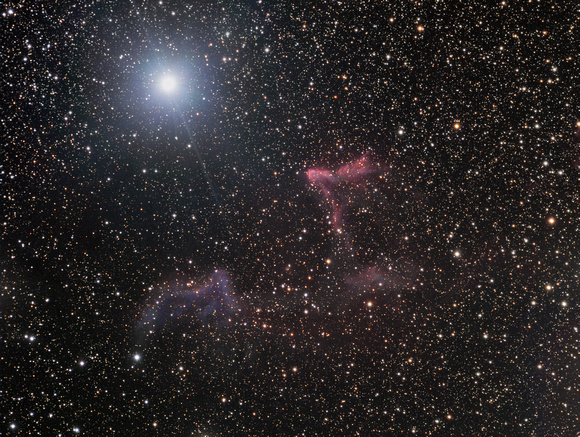 Despite their almost identical proximity to Gamma Cassiopeia and similar appearance, Sh2-185, or IC 59 (lower) and IC 63 (above and right) are actually quite different in their characteristics. Both are slowly being evaporated and dispersed into the interstellar medium by the nearby blue monster star.

The General Catalog of Variable Stars lists Gamma as an eruptive blue white subgiant variable star class B0. The star is an erratic variable that reached a maximum brightness in 1937, but then unexpectedly dropped in surface temperature from 12,000°K to 8500°K. It has an 11th magnitude companion. Distance to the star has been estimated between 200 and 600 light years. Eruptive variable stars vary in brightness because of violent processes and flares in their coronae and chromospheres. Gamma is encircled by a surrounding decretion disk that radiates the "emissions". Mass loss is apparently related to the brightness variations.