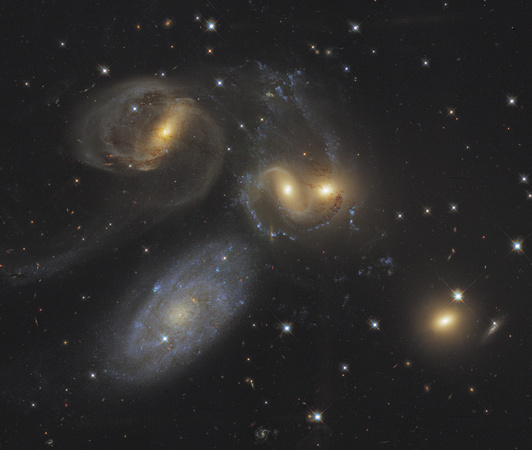 Stephan's Quintet (Arp 319) is located in the constellation Pegasus. The quintet was described by Edouard M. Stephan in 1877 and is the first compact galaxy group ever discovered. The cluster is also known as Hickson Compact Group 92. The four interacting galaxies in this image (NGC 7319, 7318A, 7318B, and 7317) have a yellowish cast suggesting a similar redshift (distance) and/or that older stars reside in their cores. They also show great distortion due to their gravitational interaction. These galaxies are 300 million light years distant, while the fifth, non-interacting member (NGC7320) glows with a blue tint in the foreground, and is a mere 40 million light years away.