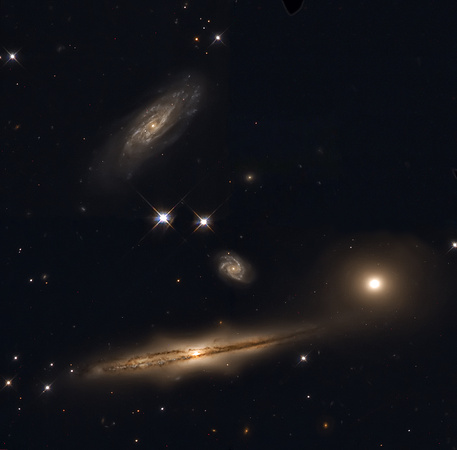 HCG 87 is about 400 million light-years away in the constellation Capricornus. The group distinguishes itself as one of the most compact groups of galaxies, hosting two active galactic nuclei and a starburst among its three members, all of which show signs of interaction.

According to NASA, this image reveals complex details in the dust lanes of the group's largest galaxy member (HCG 87a), which is actually disk-shaped, but tilted so that we see it nearly edge-on. Both 87a and its elliptically shaped nearest neighbor (87b) have active galactic nuclei which are believed to harbor black holes that are consuming gas. A third group member, the nearby spiral galaxy 87c, may be undergoing a burst of active star formation. Gas flows within galaxies can be intensified by the gravitational tidal forces between interacting galaxies. So interactions can provide fresh fuel for both active nuclei and starburst phenomena. These three galaxies are so close to each other that gravitational forces disrupt their structure and alter their evolution.