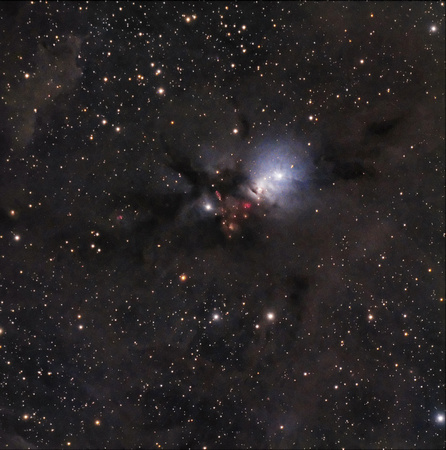 NGC 1333 is a sparkling jewel of dust and radiation. This star-forming region, located roughly 1,000 light-years away in the constellation Perseus encloses hundreds of newly formed stars less than one million years old. Many of these proto-stars exhibit energetic activity such as jets and strong stellar winds.

As can be seen in the image, all three kinds of nebulosity co-exist here - reflection, emission, and absorption.

This region is also of interest because at least one star system here, NGC 1333-IRAS 4B, contains massive amounts of water vapor - enough to fill the oceans on Earth five times over - and is the first time astronomers have seen water being delivered to the region where planets will most likely form.