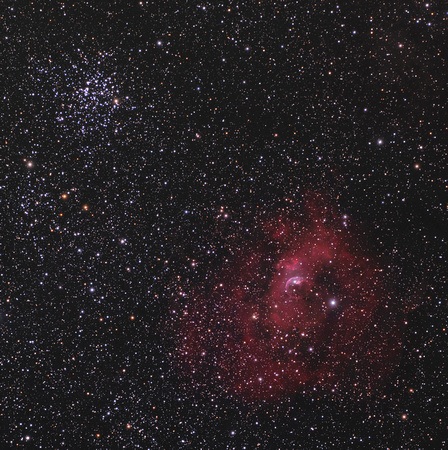 NGC 7635, also called the "Bubble Nebula is embedded in the surrounding HII region known as Sharpless 162. This area resides in the constellation Cassiopeia.

The Bubble Nebula is actually the smallest of three bubbles surrounding massive star (40x solar mass) BD+602522, and part of gigantic bubble network Sh162 created with the help of other massive stars. As fast moving gas expands off BD+602522, it pushes surrounding sparse gas into a shell. The energetic starlight then ionizes the shell, causing it to glow. BD+602522 is a type O 6.5 III (blue) giant with a surface temperature of 34,000 degrees. O spectral type stars are rare, and there are only an estimated 20,000 present in the Milky Way. It is considered a member of the Cas OB2 stellar association.

The bubble itself is actually quite large, spanning six light years across and is expanding at an incredible four million miles per hour. The bubble was formed by the bright star that is positioned above and to left of its center. The radiation released from inside that star is so intense that it literally blows its outer surface off into space. The bubble marks the leading edge of the gust from these powerful stellar winds as it plows into denser surrounding material. This object is approximately 7100 light years from Earth.
(Universe Today)

Messier 52 (NGC 7654) has a diameter or 19 light years and is about 5000 light years distant. It is one of the original discoveries of Charles Messier, who cataloged it on September 7, 1774 when the comet of that year came close to it.

Open cluster 443 is just below M52 on the left edge of the image.