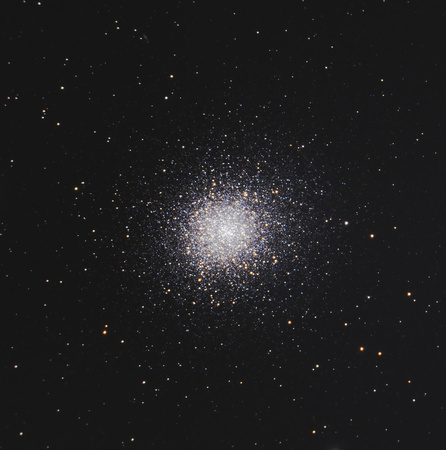 Anacortes Telescope and Wild Bird Picture of the Day May 18, 2009

M13 (NGC 6205) is a globular cluster in the constellation of Hercules. M13 is about 145 light-years in diameter, and it is composed of several hundred thousand stars, the brightest of which is the variable star V11 with an apparent magnitude of 11.95. M13 is 25,100 light-years away from Earth.

The Arecibo message of 1974, designed to communicate the existence of human life to hypothetical extraterrestrials, was transmitted toward M13. The reason was that with a higher star density, the chances of a life harboring planet with intelligent life forms, were higher.

The "Merceds Benz sign", a collection of known star-poor areas can be seen as an inverted "Y" in the left lower part of the core in this image.