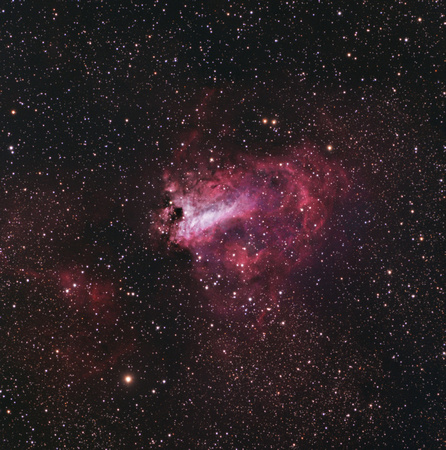 M17 - The "Swan Nebula" in Sagittarius

M17 (NGC 6618, Swan Nebula, Omega Nebula, or Lobster Nebula for those down under) is an emission nebula located 6000 light years distant in the constellation Sagittarius. The nebula is about 15 light years across and is situated in an interstellar cloud spanning 40 light years. The nebula is 800 solar masses - much more massive than M42 in Orion - which is about 300 solar masses. The gas of M17 is illuminated by an obscured open cluster comprised of 35 stars, and is considered one of the youngest and most massive nearby star-formation regions in the Galaxy with an estimated >1000 stars in the process of formation in it's extended outer regions. The star formation history in the extended environment of M17 has been punctuated by successive waves of massive star formation propagating through a giant molecular cloud complex.

The color of the Omega Nebula is reddish, with some graduation to pink. However, the brightest region is actually of white color, not overexposed as one might think. This phenomenon is apparently a result of a mixture of emission light from the hottest gas, together with reflections of the bright star light from the dust in this region. The nebula contains a large amount of dark obscuring material, which is obvious in its remarkable features.