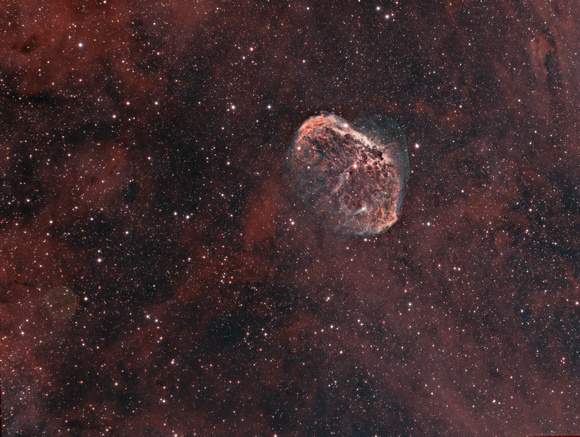 The "Cygnus Bubble" can be found in the lower left corner of the image.

The Crescent Nebula (NGC 6888 or Caldwell 27) is an emission nebula in the Cygnus constellation, about 5000 light years away. It is formed by the fast stellar wind from the Wolf-Rayet star WR 136 (HD 192163) colliding with and energizing the slower moving wind ejected by the star when it became a red giant around 400,000 years ago. The result of the collision is a shell and two shock waves, one moving outward and one moving inward. The inward moving shock wave heats the stellar wind to X-ray emitting temperatures.

The nebula is actually a huge bubble about 25 light-years across. The star is shedding its outer envelope in a strong stellar wind, ejecting the equivalent of the Sun's mass every 10,000 years. The nebula's complex structures are likely the result of this strong wind interacting with material ejected in an earlier phase. Burning fuel at a prodigious rate and near the end of its stellar life this star should ultimately go out with a bang in a spectacular supernova explosion. Found in the nebula rich constellation Cygnus, NGC 6888 is about 5,000 light-years away.

The "Cygnus Bubble" was discovered on July 6, 2008 by amateur astro-imager Dave Jurasevich with his Astro-Physics 160 mm refractor by 12 x 1200 sec exposures through a Tru-Balance 6nm Hydrogen Alpha filter with STL-11000M camera. I don't know how he saw it in the image - honestly. Great find! The bubble, which was officially named PN G75.5+1.7 is not new, just overlooked. A closer look at images from the second Palomar Sky Survey revealed it had the same size and brightness 16 years ago.

Some currently are postulating that this is an artifical phenomenon (a Dyson Sphere) constructed by some far-away civilization as a type of barrier to the outside world.