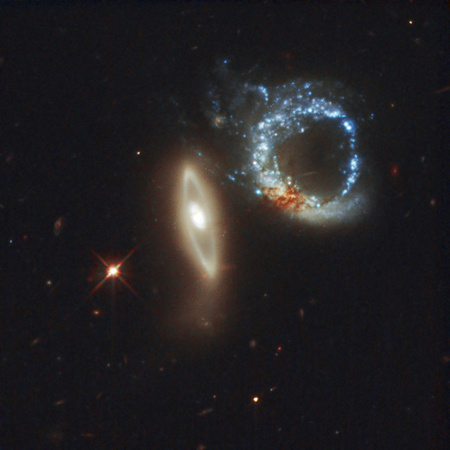 Arp 147 lies 400 million light years distant in the constellation Cetus.
The two galaxies happen to be oriented so that they appear to mark the number 10. The left-most galaxy, or the "one" in this image, is relatively undisturbed apart from a smooth ring of starlight. It appears nearly on edge to our line of sight. The right-most galaxy, resembling a zero, exhibits a clumpy, blue ring of intense star formation.

The blue ring was most probably formed after the galaxy on the left passed through the galaxy on the right. Just as a pebble thrown into a pond creates an outwardly moving circular wave, a propagating density wave was generated at the point of impact and spread outward. As this density wave collided with material in the target galaxy that was moving inward due to the gravitational pull of the two galaxies, shocks and dense gas were produced, stimulating star formation.

The dusty reddish knot at the lower left of the blue ring probably marks the location of the original nucleus of the galaxy that was hit.
(Hubble Site)