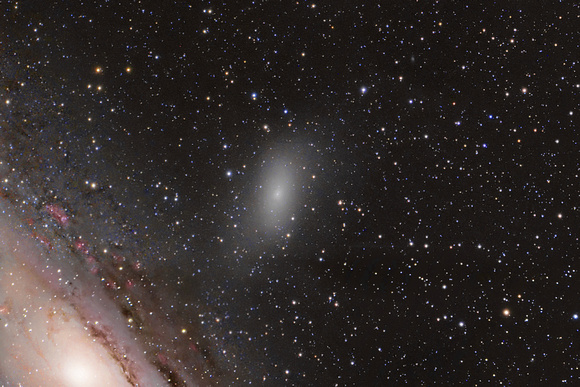 Just cropped a low res shot from the M31 image to add to the Messier list.

The small elliptical galaxy M110 (NGC 205) is at about the same distance as the Andromeda galaxy M31, about 2.9 million light years, as confirmed by Walter Baade in 1944, when he resolved it into stars (Baade 1944). It is of Hubble type E5 or E6 and is designated "peculiar" because it shows some unusual dark structure (probably dust clouds). M110 is now often classified as a dwarf spheroidal galaxy, not a generic elliptical one (this would make it the first ever known dwarf spheroid, of course). However, as it is much brighter than typical dwarf spheroids, Sidney van dan Bergh has introduced the term "Spheroidal Galaxy" for this and similar galaxies, including Local Group members NGC 147 and NGC 185. M110's mass was estimated to be between 3.6 and 15 billion solar masses.

Apparently, despite its comparatively small size, this dwarf elliptical galaxy has also a remarkable system of 8 globular clusters in a halo around it. The brightest of them, G73, is of about 15th magnitude and thus within the reach of large amateur telescopes
(SEDS)