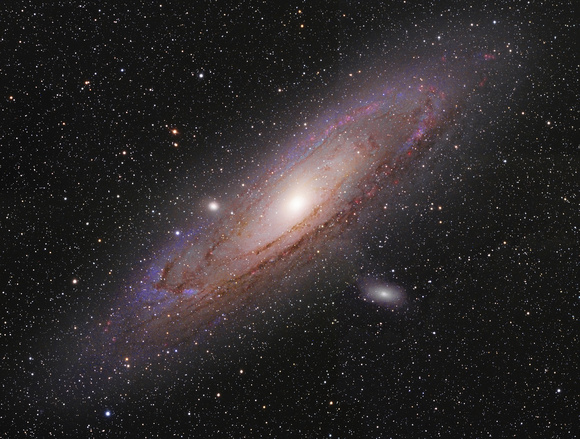 Anacortes Telescope and Wild Bird Picture of the Day January 4, 2010

The Great Andromeda Galaxy is approximately 2.52 million light years from earth and is 125 thousand light years across from front to back as seen from earth. It is likely that the ancestors of the human species were still on all fours when the light left the back side of Andromeda, but were walking upright and using stone tools by the time it reached the front edge of the galaxy. In any event, if you see Andromeda, keep in mind that you are seeing the light from when Humanity was just starting to gain a foothold on planet Earth.

M31 in Andromeda is the nearest major galaxy to our own Milky Way Galaxy and the two galaxies are on a collision course, approaching each other at the rate of 100 to 140 kilometers per second (300,000 MPH). This catastrophic wreck will begin to happen in approximately the year 1,000,000,000 AD.

Our Galaxy is thought to look much like Andromeda and together these two dominate the Local Group of galaxies. The several distinct stars that surround Andromeda's image are actually stars in our Galaxy that are well in front of the background object. Much about M31 remains unknown, including why the center contains two nuclei.

M31 is large enough and close enough that scientists are able to study smaller structures within the galaxy, like the structures within our own galaxy. One of these, star cluster NGC 206 has it's own designation.

Here's an interesting article by Tom Trusok concering all the different objects within the Andromeda Galaxy.