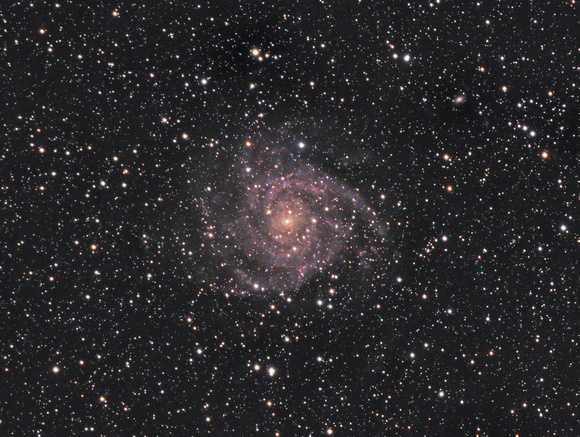 Spiral {SAB(rs)cd} Galaxy IC 342 - also known as Caldwell 5 - is located roughly 11-14 million light-years from Earth in the constellation Camelopardalis, “the giraffe”. Its face-on appearance in the sky—as opposed to our tilted and edge-on views of many other nearby galaxies, such as the large spiral galaxy Andromeda (M31)—makes IC 342 a prime target for studies of star formation and astrochemistry, unfortunately, it is located near our galactic equator where dust obscuration makes it a difficult object for both amateur and professional astronomers to observe.

Since it lies only 10 degrees or so off the galactic equator and therefore is obscured by a factor of 2.5 magnitudes by interstellar debris. If it were not for this decrease in magnitude, it would be one of the brightest galaxies in the sky. It is the largest galaxy in the northern sky after M31 and M33.