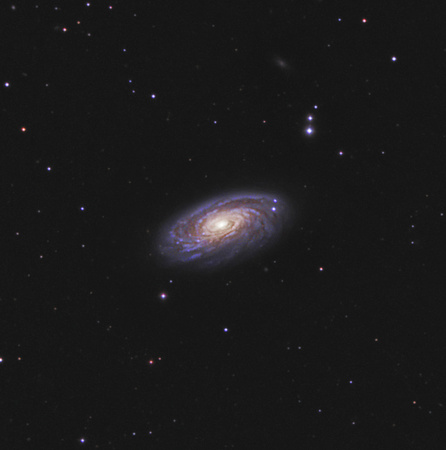 Anacortes Telescope and Wild Bird Picture of the Day April 13, 2010

Messier 88 (NGC 4501) is an Sbc spiral galaxy about 47 million light-years away in the constellation Coma Berenices and spans over 100,000 light-years. This galaxy is one of the fifteen Messier objects that belong the Virgo Cluster of galaxies. This galaxy may be on a highly elliptical orbit that is carrying it toward the cluster center, which is occupied by the giant elliptical galaxy M87.

M88 is classified as a type 2 seyfert galaxy, which means it produces narrow spectral line emission from highly ionized gas in the galactic nuclei. The supermassive black hole at the core of this galaxy has 107.9 solar masses, or about 80 million times the mass of the Sun.