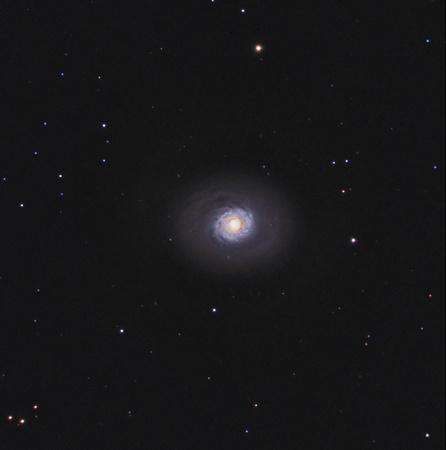 This image is constructed from only three 15 minute subexposures - 45 minutes total. All weather forecasts including NOAA, the Clear Sky Chart and The Weather Channel called for pristine skies, but after I got three good frames, I noticed that the fourth was quite washed out. I went outside and sure enough it had hazed over. Not one to waste data (or be able to leave it alone), I just made due with the 3 frames I had and processed accordingly. A little noisy and lacking background galaxies, but it will do until later.

M94 (NGC 4736) lies 15 million light-years distant in the constellation Canes Venatici (The Hunting Dogs). This spiral galaxy is about 30,000 light-years across. It exhibits prominent dust lanes, a point-like nucleus, and a bright, bluish ring dominated by the light of young, massive stars. The massive stars in the ring are all likely less than 10 million years old, indicating the galaxy experienced a well-defined era of rapid star formation. As a result, while the small, bright nucleus is typical of the Seyfert class of active galaxies, M94 is also known as a starburst galaxy.