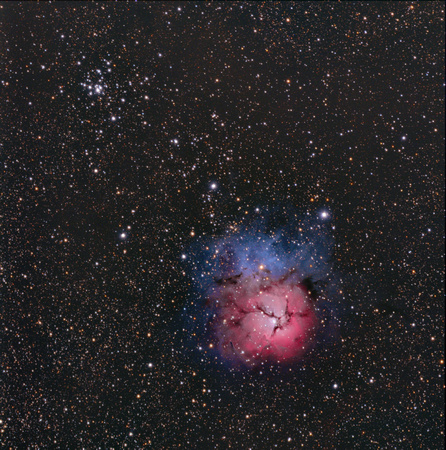 Anacortes Telescope and Wild Bird Picture of the Day July 1, 2009

The Trifid Nebula, M20 or NGC 6514, is famous for its three-lobed appearance. The red emission nebula with its young star cluster near its center is surrounded by a blue reflection nebula which is particularly conspicuous to the northern end. By recent estimates, the nebula lies about 9000 light years from earth.

The dark nebula which is the reason for the Trifid's appearance was cataloged by E.E. Barnard as Barnard 85.

Open Cluster M21 (NGC 6531) lies to the upper left of M20 in this frame. M21 is a relatively young cluster of only 4.6 million years of age. It is tightly packed but contains about 57 stars. A few blue giant stars have been identified in the cluster, but M21 is composed mainly of small dim stars.