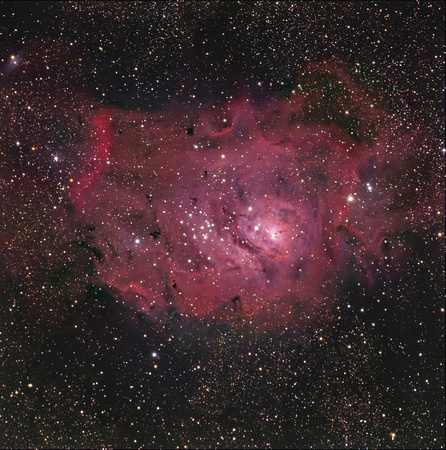 M8 (NGC 6523) - The "Lagoon Nebula" lies at a distance of 4,100 light years from earth, and measures 110 by 50 light years. The entire area is a giant star forming area containing a number of dark, collapsing clouds of protostellar material, the most prominent of which are Barnard 88, 89, and 296. The stellar nursery has already formed a large, young (2 million years old) star cluster - open cluster NGC 6530 - that resides within the nebula.

Within the brightest part of the Lagoon Nebula, a proiminent feature can be seen called the "Hourglass Nebula" which occurs in a region where a vivid star formation process appears to take place; the bright emission is caused by heavy excitation of very hot, young stars. The illuminator of the hourglass is the hot star Herschel 36 (mag 9.5, spectral class O7).