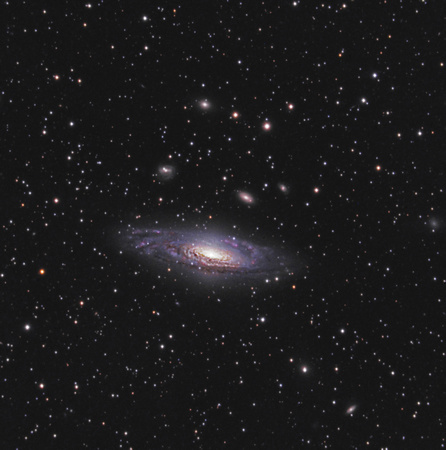 Deer Lick Group: The dominant galaxy is NGC 7331, a magnitude 10.3 spiral galaxy estimated to be close to 50 million light years away. It is thought that this is similar to what our galaxy would look like from a like distance and angle. It has a radius of about 32,000 light years. This group apparently was given this odd name "in commemoration of one of the finest nights of viewing EVER, at Deer Lick Gap, just off the Blue Ridge Parkway, in the NC mountains," by persons unnamed.

NGC 7331 is one of the brighter galaxies which is not included in Messier's catalog. It exposes a fine spiral structure despite its small inclination from the edge-on position. NGC 7331 was among the earliest recognized spiral galaxies, and listed by Lord Rosse in his list of 14 "spiral or curvilinear nebulae" discovered before 1850.