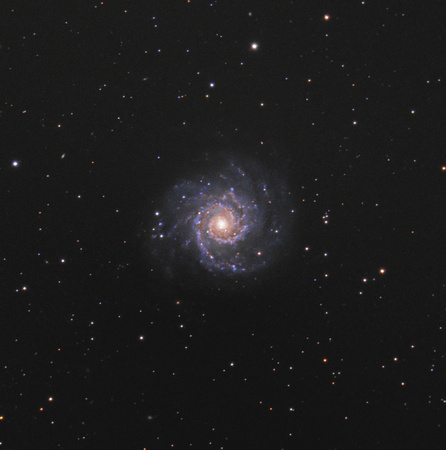 Of all the objects in Messier's catalogue, number 74 has the lowest surface brightness. It is so difficult for amateur astronomers to spot through a telescope that it has been given the nickname 'The Phantom Galaxy' and is the Messier object most likely to thwart a Messier Marathon.

Discovered 1780 by Pierre Méchain, Messier 74 (M74, NGC 628) is one of the nicest examples of so-called "grand-design" spiral galaxies seen face-on, so that its spiral structure stands out conspicuously. With its comparatively low surface brightness, it is one of the more difficult objects in Messier's catalog, situated in constellation Pisces.

Its distance may be about 30 to 40 million light years, as it recedes with 793 km/sec. Its spiral arms are about 1000 light years broad. They are traced with clusters of blue young stars and pinkish colored diffuse gaseous nebulae (H II regions) in color photos, and reach out to cover a region of more than 10 minutes of arc in diameter, corresponding to roughly 95,000 light years, or about the same size as our Milky Way galaxy. The Webb Society deep sky observer's handbook gives a number of 193 known H II regions.

Two supernovae have been discovered in M74: