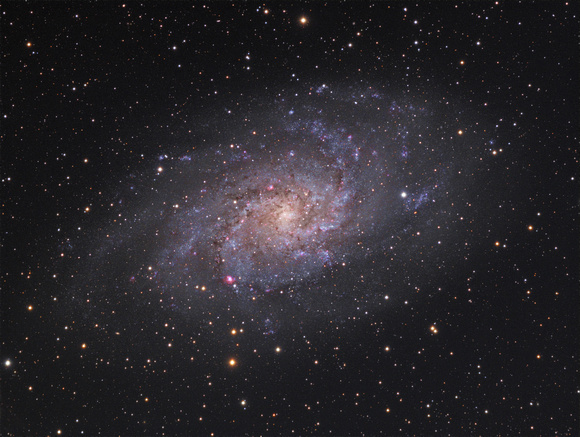 Anacortes Astronomy and Wild Bird Picture of the Day October 5, 2010

This is the first dedicated galaxy image with the QSI 583WSG. Just in case you are interested, here are links to the Luminance and Color components of the image. Notice that the color component is oversaturated and soft - rather poor as a stand-alone image, but is optimized to add color to the image, not detail. The luminance component adds all the sharpness and detail to the final image.

The Triangulum Galaxy Messier 33 (M33, NGC 598) is another prominent member of the Local Group of galaxies. This galaxy is small compared to its big apparent neighbor, the Andromeda galaxy M31, and to our Milky Way galaxy, but more of an average size for spiral galaxies in the universe. M33 may be a remote but gravitationally bound companion of the Andromeda galaxy M31.

Several knots in the spiral arms of M33 have been assigned their own NGC catalog numbers - the largest of which in this image is in the lower mid-left and is NGC 604. This is one of the largest H II regions known anywhere in the universe: it has a diameter of nearly 1500 light-years, and a spectrum similar to the Orion nebula M42. Over 200 young hot massive stars (of 15 to 60 solar masses) have recently formed here.

Some other catalogued objects are identified in this map.