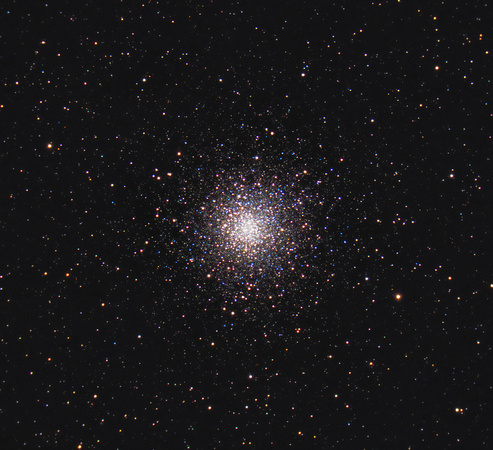 Astronomy Magazine Picture of the Day May 16, 2008

Messier 10 (also known as NGC 6254) is a globular cluster in the constellation Ophiuchus. It was discovered by Charles Messier on May 29, 1764, cataloged as number 10 in his list, and described as a "Nebula without stars".

This 7th magnitude globular cluster appears at about 8 or 9 arc minutes diameter when observed visually in smaller instruments. Average photos show it at about 15.1 arc minutes diameter, and deep photos show it to reach out to about 20 arc minutes, or 2/3 of the diameter of the Full Moon. At its distance of 14,300 light years, this corresponds to a linear diameter of 83 light years. Its brighter core which can be seen visually is only less than half as large, about 35 light-years. It is receding from us at 69 km/sec.

Only 4 variable stars have been discovered in this cluster.